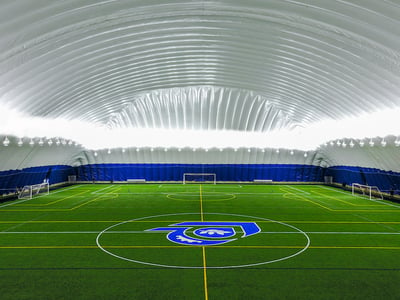 The Plymouth Parks and Recreation Department in Plymouth, MN, originally inflated its then-new fieldhouse dome in 1999, working with Yeadon Domes to design and build it.

The dome was such a success in the community that when the opportunity came to replace and upgrade the dome membrane in 2017, it was a no-brainer.

The fieldhouse dome is inflated from November through late-March, providing an indoor play space for soccer, softball, baseball, football, lacrosse, rugby and other community sports. It’s also a space for the community’s kids to run off some energy throughout the season at “open play,” a three-times-a-week event complete with toys, balls and bouncy inflatables. Seniors also gather to stay active and see their friends while walking the path along the perimeter of the fields.

The city estimates the number of dome users is approximately 150,000 people in the five-month period of time that it’s up. In a city with a population of just over 70,000, that’s akin to each resident visiting the dome more than two times during that period.

For over 40 years, Shelter-Rite architectural fabrics have been engineered with a proprietary coating formula for superior UV and mildew resistance, and unique weft-inserted knit fabric that provides excellent tensile, tear and seam strength. This time-tested technology has resulted in architectural structures that maintain long-lasting aesthetics.