The Arizona Cardinals keep it “cool” with inflatable practice dome. 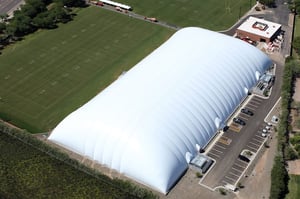 Thanks to Yeadon Domes, they’re doing just that.

The Cardinals make their home in Tempe, AZ, where temperatures average between 103 and 105 degrees Fahrenheit during the early part of football season. In order to stay cool, the team turned to Yeadon Domes to design and build an inflatable dome so that it could practice indoors on days it’s too hot.

Yeadon Domes, located in Minneapolis, MN, has decades of dome-building expertise and incorporates the latest innovations in design, anchoring and mechanical and electrical systems to provide the ultimate in efficiency, safety and comfort for every air dome. The company was the first air-supported manufacturer to help customers increase thermal performance on year-round structures, cutting utility bills nearly in half.

Constructed in 2013 utilizing Shelter-Rite Architectural Fabrics’ 8028 DC6 TS 139/White/OP/DC6, the 78,000-square-foot dome was designed to strictly adhere to NFL regulations. Most importantly, it was insulated and air-conditioned to allow the Cardinals to stay on a regular practice schedule that did not require early morning practices or bussing players to nearby Arizona State University’s practice dome to avoid the worst of the heat.

The dome features a unique skylight that was installed to mimic light conditions at game time in their own stadium, which includes a roof that can be opened or closed depending on the weather.

For over 40 years, Shelter-Rite architectural fabrics have been engineered with a proprietary coating formula for superior UV and mildew resistance, and unique weft-inserted knit fabric that provides excellent tensile, tear and seam strength. This time-tested technology has resulted in architectural structures that maintain long-lasting aesthetics.